In early October every year, when the flooding in the Mekong River Delta starts, Tra Su cajeput forest has a new vitality. The Tra Su cajeput forest in the southern province of An Giang has become a favorite tourist spot, especially for those who respect its diverse ecosystem. The 845ha forest zone is located about 20km from Chau Doc Town, 10km from the border with Cambodia. The man-made forest is home to 140 species of plants, 70 species of birds, 11 species of animals, 23 of fish and 20 of reptiles. Two species of birds have been listed in the Red Book, including the giang sen (painted stork) and dien dien (anhinga or snake bird).
However, to maintain the natural environment, tourists are allowed to travel only within a 159ha area of the zone, starting by motorboat in Tra Su forest. 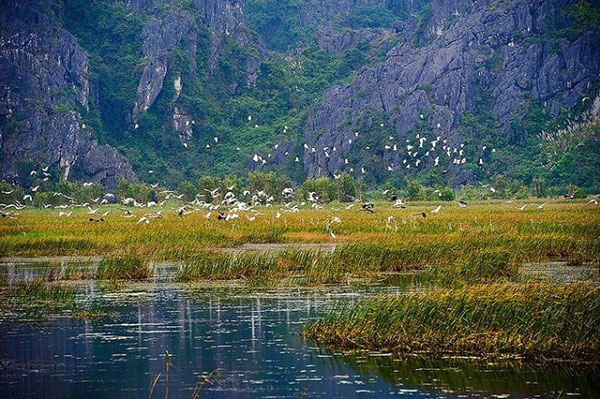 As the boat glides from the wharf, the cool air is refreshing. The green trees, cool water, and birdsong are enhanced by the sight of pink water-lily flowers rising and falling in the wake of the boat.The period from August to November is the best time for exploring Tra Su when the forest is flooded and it is also the fragrant cajeput blossom season, called "honey season" because of the millions of bees that flock to the forest to make honey from the flowers. Big beehives hang from tree branches.
Gliding silently across the green duckweed and other water plants, visitors can see life going on at low-branch level while on high white storks fly into tree-top nests with a cacophony that dominates the feathered score.
On branches near the surface, pelicans stand quietly, ignoring the babble around them, eyes glued to the water for a sign of fish.
In fact, this swamp-like environment is ideal for catfish, which can be caught on fishing rods hired at the only restaurant in the reserve.
Alongside fresh fish, restaurant customers can savor local ingredients such as steamed snakehead fish in the gourd, charcoal grilled snakehead fish wrapped in lotus leaves, and field crab with tamarind sauce and dien dien flower pickle. 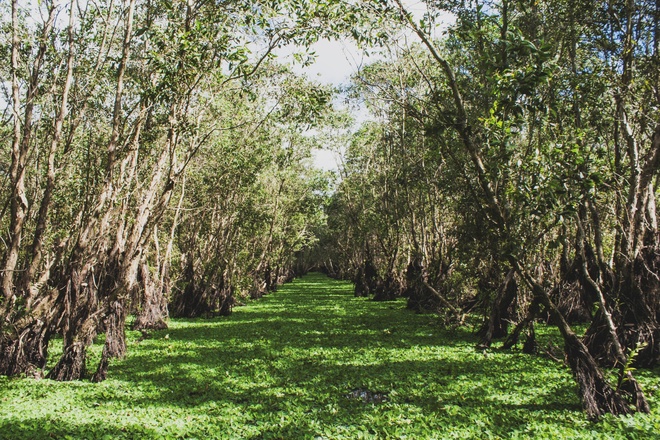 There's an observation tower next to the fishing area with a panoramic view of the park, where you can see the immense green zone that stretches for miles, and catch the harmonics of breeze and bird to purify the soul.
The Tra Su Reserve closes at 5 pm. There is no accommodation available, so it's a 20km bus ride back to the town. However, cajeput honey or oil can be bought as a reminder of this unspoiled and tranquil green zone.

Together with U Minh and Cham Chim national parks, Tra Su reserve is one of the green lungs that balance the climate of Southwest of country. If you want to visit Tra Su cajeput forest in your Mekong trip, let's contact us right now. Thank you and see you soon!